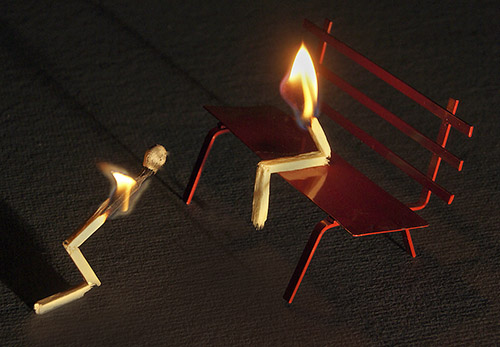 This  is probably my very favorite landscape image. And I owe a lot of thanks to Stan Bell for this image, as it needed some Photo­shop adjusting; as I was totally new to Photo­shopping anything.

One early December morning, I was walking along a pathway behind Kumeyaay Lake in Mission Trails and saw this stunning image happen right before my eyes.  I flashed back to a warm childhood memory of a movie I saw called the “Ten Commandments.” In that movie, you may recall was the moment when Moses ascended Mt. Sinai and spoke to God in the form of a glowing bush that wasn’t burning. Call it an epiphany if you will, but this special effect had such an impact on me that I tried to recreate it with this image. I put them side by side and it looks pretty close!  I’ve always been fascinated by things that glow. 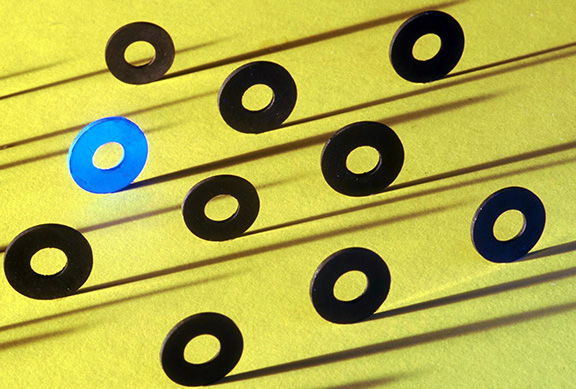 Sometimes I like to use ordinary objects and create still life photos with them. I used the shadows of the washers created by the lights to simulate motion for the washer race. I painted one blue to be a focal point. The judge that day took one look at my image and laughed and said, “get a life.” Then said “6” Well, it didn’t get a good score, but who cares. I LIKE IT!

The amazing thing about this shot was it worked! I have never composed a still life before that, from the initial idea to the finished product.

It all came together so quickly. I didn’t have to do several nights worth of takes like in most other stills. It was accomplished within 30 minutes of the initial set up. I ordered a metal doll house bench instead of a more attractive wood bench because of the risk of fire.

I was trying to convey passion between two matches, so I submerged both match sticks in water to make the torsos bendable but not breakable and that idea worked. I bent them in positions facing each other, and positioned the female match on the bench leaning toward her beau. They held their positions. I double sided taped them to their bases. As you can see in the initial set up, all I needed was the passion of the fire. And VOILA! 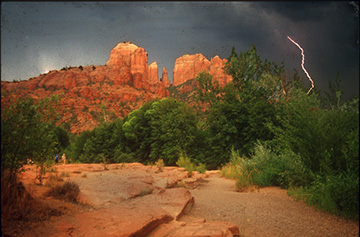 My most unforgettable image was this shot I took many years ago in Sedona. Gail and I were on vacation in Northern Az. and pulled into Sedona late on a hot summer afternoon.

As we were arriving at the hotel, I noticed some ominous clouds building toward Cathedral Rock. I’ve always enjoyed the drama created by storm clouds, so I got pretty excited about this. Wow, of all places, a thunderstorm over Cathedral Rock? What a unique shot to bring back to the club! A shot to die for, right? ( I almost did. )  I didn’t dare tell Gail what I was up to. I told her I was going to drive around a bit. She stayed at the hotel.

Deciding I wanted to be Byron Aughenbaugh for one afternoon, I headed out for the  “Rock.” Honestly, I’ve never photographed lightning before, and let me tell you it’s SCARY!!!  Cathedral Rock was getting darker and more ominous by the minute. This storm was parked directly overhead, and wasn’t about to move. Then, there was an explosion and instant flash. I pressed the trigger and got this shot. Then all hell broke loose, one bolt after another. I decided I’d had enough and ran back to my car as fast as I could go, with tripod in hand. To this day I don’t know how Byron gets his shots! After this experience with my tripod as a lightning rod, it’s all yours Byron!